So dramatic, so strong, so visual,” artist Stephen Gladieu said of his first encounter with the revival of an ancestral folk art movement in Kinshasa, Democratic Republic of Congo. Kinshasa is the capital of Congo but also one of the many places American and European countries send their waste. Though doing so is illegal, wealthier nations still export tons of debris with the knowledge that these places do not have the resources to treat or recycle it. Instead, these discards sit, swell, and slowly drown everything around them.

In the face of this ecological disaster, the young people of Kinshasa began to repurpose the waste into traditional religious costumes that had previously been destroyed, along with other cultural histories and rituals, by the forced Catholicism of colonization. Gladieu’s relationship with these artists has evolved into the Homo Detritus series.

“(In the photographs), we are talking about ecology, but we are talking about ecology through African masks. As you can see, they’re completely covered up. You don’t see any part of the skin. The traditional masks were done with natural materials. They symbolized the spirit of the ancestors or the spirit of support of the natural world. These young artists reinvent these traditional masks in a way, but they do it today with trash because they find more trash and natural materials.” 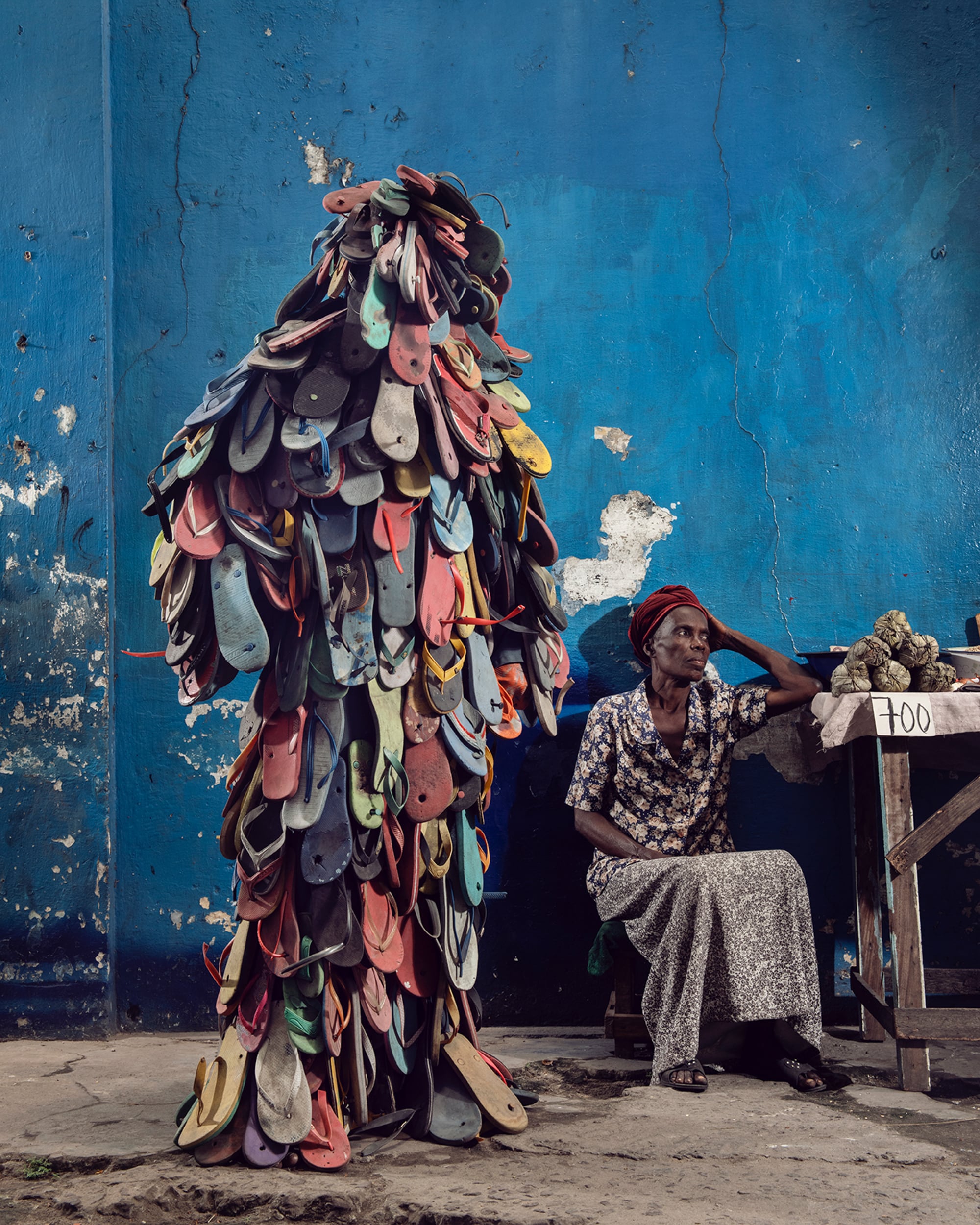 While doing research in Yoruba for a different photo project that has yet to be released, Gladieu found some grainy photos of a girl dressed in plastic bottles. After reaching out to the contact, he discovered that several of these outfits already existed in Kinshasa and were being produced by local artists as a cultural response to the growing waste problem. However, some of them were damaged due to the lack of resources to properly store the pieces. The labor ranged widely. It could take a few days to repair a mask or when working in groups of three to four people. When using plastics like the shoes seen in “Babouch” (“Flip-Flop”), costume construction could average five to six days. The most complex garments made of tires, bottles, and metal scraps took up to three to four weeks.

In “Homme Bidon,” which translates to “Phony Man,” brightly colored cups, water containers, and buckets form a mask. With two pails in each arm, the figure balances a water bucket on top of its head. The opening of a yellow container becomes a mouth, and a perforated top represents its eyes—creating a painted expression that also evokes thirst. To the left of the figure, there is a woman in a yellow chair pouring water into her hands. This image references the inequitable economics of water that disproportionately affect poorer countries like those across Sub-Saharan Africa where, as of 2020, 30 percent of people have access to safe drinking water. The surrounding environment also nods to the gendered divisions of women and girls who are responsible for gathering this vital resource for their communities.

The young artists of Kinshasa and Gladieu’s photographic approach set this project apart from other ecological art concerning this region. “I didn’t want to do work that would be dark. A lot of work had been done like that,” Gladieu said of wanting to avoid guilting viewers into paying attention. “People don’t want to see and don’t really react anymore to those images. It doesn’t help them realize that we all have a personal responsibility in the way we consume and throw things away.” This approach also better honors the agency and resilience of the community of Kinshasa. It exalts the reclamation of their culture rather than the systemic violences enacted against them. “L’Homme Caoutchouc” (“The Rubber Man”) calls out industrial companies that are not relegated to strictly enforced environmental regulations. This charge is captured in the figure’s monstrous stance, rugged form, and emerging from a pool of oil black mud. Similarly, “L’Homme Sachet” (‘The Bag Man”) speaks to the way the plastic bag engulfed many developing countries and quite literally consumed land, animals, and water sources. The abundant layers and repetitive colors represent the excess of plastic that hungrily survives even after we have tossed it into our garbage cans and out of our minds. Along with the depth of representation, Gladieu’s portrait style captures the magnitude of each figure’s artistic presence. He attributes this accomplishment to the collaborative nature of the project.

“I was living with (the artists in Kinshasa). We chose the materials, and I helped provide the money to build a costume or to repair the ones that were damaged. Then we worked in the city to choose the backgrounds. And when I say it’s a collaborative project, it’s also in terms of income because there is a part of the money that I can send by doing speeches and books. It’s a wonderful experience, even if it’s not easy. There are 25 artists. So sometimes it’s a mess, but it’s quite fun.”

You can see more of Homo Detritus on Gladieu’s website, Instagramor by pre-ordering his forthcoming monograph, which will be released in November. 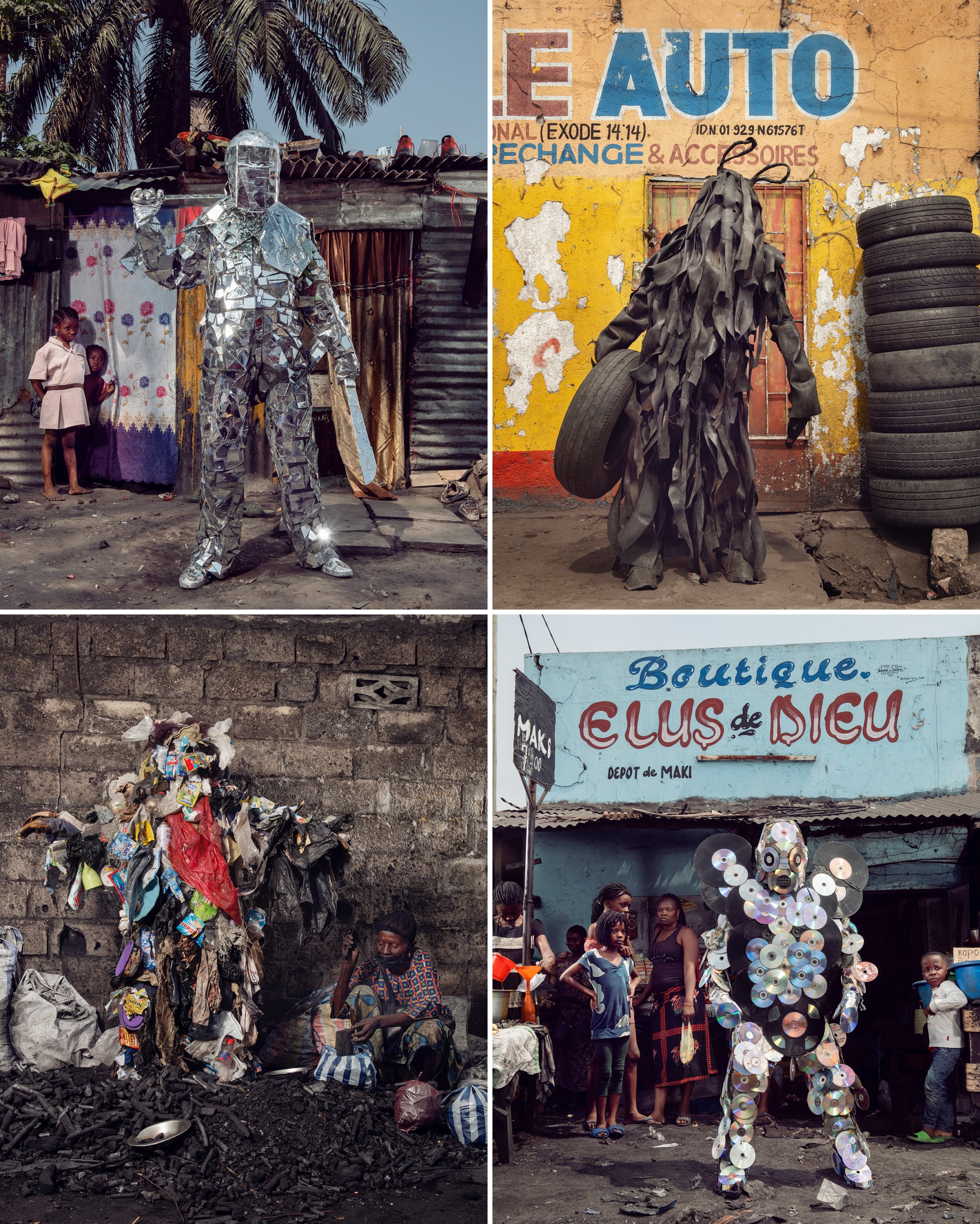